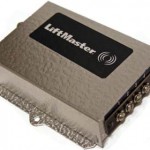 Many times as I sit in my car about to drive out my driveway I wonder “did I arm my security system?” In the past I would either pull out my phone, browse to my PowerHome website and check to see if it is armed, and if not I would arm it, or I would walk back into the house to check. I’ve got a homelink remote in my car which works great for opening and closing my garage door, so I wondered what it would take to have one of the unused buttons in my car arm my system. I don’t want to use any of the buttons to disarm my system for security reasons, but I don’t see any risk in setting it up to arm the elk. The steps below will tell you how I did it. It is a pretty easy install. Anyone that installed an Elk should be able to do this very easily.

Receiver. I did a little research and found that I could get LiftMaster receivers pretty cheaply (less than $50 depending on whether you need any remotes). There are a lot to choose from, so here’s some guidance. First of all, I got the LiftMaster 312HM, available in many places–search online. This model comes with an external antenna and operates at 315MHz. I believe you must get a receiver that operates at this frequency for the homelink to work. There are receivers out there that use 390MHz, so avoid those. The way the receiver works is that when a signal is received that has been learned into the receiver, the receiver electrically closes (shorts) the two output terminals for one second. This is perfect for integrating with an Elk. We can tie those two terminals to a zone input, set that zone to unsupervised, normally open, and write some rules for it to do the magic when the zone is “violated”. Perfect. Note that the 312HM is a single-channel receiver. There are dual- and three-channel receivers that allow you to program several remotes to it and close different terminals depending on which remote was pushed.

Mounting. I mounted my remote right next to my garage door inside my garage. I chose this location because I already had wiring run from that area back to my elk. This wiring was because I installed a magnetic sensor there to tell me if my door was closed. If you don’t have a sensor installed on your door, this might be a good time to do it. You don’t need the sensors for this project, but if you have to crawl under your house, why not kill two birds, right? I suppose mounting the receiver close to the door will also maximize the reception because the receiver will be physically closer to the car when someone pushes the button. You will also need to power the receiver. You could tap off the 12V outputs from your garage door, or you can buy the wall-wart transformer from Liftmaster model 85LM, which is what I did. I’m sure that other transformers would work if you found the right voltage and amperage.

Wiring. I suggest that you run four-strand wire from your mounting location back to a zone input on your elk. That way if you do decide that you need to connect something else, you will have a pair of wires ready.

Initial Elk programming. First set up the zone. Make it unsupervised, normally open. I also made it a fast-loop because the relay only closes for a second, and I wanted to be sure that the elk recognized it that fast. Probably not necessary, but I did it anyway. I also set it up as a type 16, non-alarm and chose to enable the chime, and I named it “Remote Arm”. Next, set up a simple rule so that you can easily tell if everything is working. Something like WHENEVER Remote Arm (Zn XX) BECOMES NOT SECURE THEN CHIRP THE OUTSIDE SIREN 1 TIME. You could have the elk say something, or just listen for the chime. Also, if you are close to the receiver, you will hear the relay click.

HomeLink programming. I think of the homelink as being similar to those universal IR remotes where you had to learn new commands by putting the factory remote head-to-head with the universal remote. You then press a special key sequence on the universal and then the key on the factory that you want to learn into the universal. The universal just repeats what it learned. So, for the homelink programming, on my 2011 Acadia, I press and hold the outside two buttons for 20 seconds. The HomeLink indicator light flasshes fast to tell you it is in learn more. Press and hold the Homelink button you want to associate with the remote arming transmitter, and press and hold the remote arming transmitter. Watch the indicator light flash slow at first and then flash fast. At this point the homelink has learned the new transmitter. Press the new homelink button that you just programmed and hold it for about a second. With any luck, the 312HM will recognize the newly trained transmitter and do its mogic. In my case, it did not work. So I had to go to the backup programming instructions. Back on the 312HM, press and release the learn button. Then back in your car (you only have 30 seconds to do this, so you may need help), press and hold the newly trained homelink button for two seconds. If the receiver still does not respond, press and hold the homelink button again for two seconds. In my case, the 312HM always responded to the second attempt. I guess the 312HM uses some kind of encoding that is a little different than that of my garage door opener. The HomeLink system cycles through the different encoding methods each time you press it. Supposedly you may have to do this press and hold for two seconds exercise up to four times before the right encoding is found. At this point, you should be completely paired with one handheld transmitter and the homelink system. And your elk should be responding each time either of these are pressed.

Case number one
WHENEVER Remote Arm (Zn XX) BECOMES NOT SECURE
AND Home (Area 1) ARM STATE = DISARMED
AND EXIT DELAY, ANY AREA IS NOT ACTIVE
THEN TURN auto arm delay (Out XX) ON FOR FIVE SECS
THEN ARM AREA(S) 1 TO AWAY IMMEDIATELY
THEN CHIRP THE OUTSIDE SIREN 1 TIME

Case number two
WHENEVER Remote Arm (Zn XX) BECOMES NOT SECURE
AND Home (Area 1) IS ARMED AWAY
AND EXIT DELAY, ANY AREA IS NOT ACTIVE
AND auto arm delay (Out XX) STATE IS OFF
THEN CHIRP THE OUTSIDE SIREN 2 TIMES

So now, if I press the remote after the system is armed (like if I arm the system on the way out using the keypad but forgot by the time I got to the car. I’m old, it happens), the outside siren will chirp twice telling me it is already armed. I found that if I didn’t use that output to block the second case, both rules would fire when I pressed the remote button. I think I can do without the checks for the exit delays being acive, but for now, I do have them in.

So now I have both handheld remotes in my wife’s car, and I have both remotes programmed into the homelink in my car. In my car, I can press one homelink button to operate the garage door, and I can press another button to arm my security system. The third button is unused. One thing I have noticed is that with the homelink system, you do have to press and hold the button for a full second or two before it seems to do anything. WIth the handheld remotes, they respond much faster. So I have trained myself to press and hold the buttons when I want it to do something.